The Khaudom National Park is situated north of Tsumkwe at the border of Botswana. It is the most pristine nature conservation area in Namibia. Rarely visited, very large, extremely wild and with a rudimentary tourism infrastructure – Namibia’s forgotten wilderness.

The park is borderless with only a stretch of 55 km against the Botswana Border with a fence. This allows wildlife to pursue on old migratory routes from the water-rich Kavango and floodplains to the dry forests dominating by Leadwood, Manketti, Seringa, Camelthorn and Teak Trees.

The Khaudom is very rich in wildlife like elephant, giraffe, lion, wildebeest, leopard, kudu, oryx and hyena. You will also find the endangered roan antelope and wild dog in the park. There are also more than 300 different species of birds in this unspoiled and wild wilderness.

This park is all about adventure, travel is slow, mostly in 4×4 because of the sandy roads and two or more vehicles in a group are highly recommended. Sikereti Camp in the south has basic facilities and then a modern Khaudom campsite just completed in the north. The size of the park is 3842 km2

The Kavango Region is situated in the far North-East of Namibia and stretches along the Okavango River which forms the natural border between Namibia and Angola. To the west is Owamboland and to the east the Caprivi. With a population of approximately 228 000 in an area surface of 48 742 km2, almost 90% of the people live in the narrow strip of 5-10km next to the Okavango River. This is due to water and the suitability of the soils and pasture for farming. Most of the people are poor and make a living from fishing,tending cattle and cultivating sorghum and maize.

The Mahango National Park borders the river nearby Divundu and it covers 244km. you will find lots of magnificent Boabab trees on the banks of the river. Lots of elephant, buffalo, oryx, kudu, roan, sable, tsessebe, impala and sitatunga are to find in the park.
It is also home of more than 400 bird species and is one of the only game parks in Namibia where unguided hiking is permitted.

The Caprivi is a tropical area, with high temperatures and much rainfall during the December-to-March raining season, making it the wettest region in Namibia. The rain is mostly made up of swamps, floodplains, wetlands and tropical woodlands.

In addition to the Zambezi River, the strip also holds the Linyanti and Kwando River, which marks the borders with Botswana, Angola, Zambia and Zimbabwe

Katima Mulilo is the main capital of the region and the total population is 80,000 people. They also farm and are poor, tourism is very important in the region with lots of lodges and campsites. The region is 19,532 km² and is almost entirely surrounded by foreign countries, its only domestic border is a short connection in the west with Okavango region.

There at four National parks in the Caprivi Region: Mamili, Mudumu, Bwabwata and the Nkasa National Park. Wildlife like elephant, buffalo, lion, cheetah, wilddog, roan, giraffe, letshwe, kudu and 439 bird species are in the parks.

We all meet at the Spar in Grootfontein between 11h00 and 12H00. Do some last minute shopping, fill your vehicle with fuel and then we leave not later than 13H00. We follow the B8 north for 58 km, turn right on the C44 which is a good gravel road to Tsumkwe. This is the main town of the Bushman world, here you will find these little friendly people. We fill our vehicles again and proceed north to the Khaudom National Park. We put up camp at Sikereti Community Camp in the Khaudom. The camp is very basic and rustic. Dinner at 20H00.

After breakfast we all deflate our tyres to 1.0 bar or less because today we drive a very sandy road with a high “middle mannetjie” We drive north through the park, hopefully we will see lots of elephants, roan, Oryx and other wildlife. The park do have lots of lions, leopard, cheetah and hyena. We will reach our next destination, Camp Khaudom, late afternoon and put up camp. This place is beautiful and the view amazing. Big campfire and dinner will be served at 20H00.

Today we negotiate a very sandy section of 48 km north, it will take us 4 hours before we reach the B8 which is the road between Rundu and Divundu. From here to Okaquito lodge/camp on the banks of the mighty Kavango River, set up camp end enjoy the stunning view and sunset. Dinner at 20H00.

After breakfast we move to the next beautiful place next to the river called Ndurukoro. Very special campsites with a view on the river that will blow your mind away. These that are interesting in some Tiger fishing are more than welcome, Leon the owner, specialize in the sport. Relax next to the swimming pool overlooking the river and dinner will be served at 20H00..

Today we travel to Divundu, fill our Vehicles and there is also a supermarket. Ngepi is vey well known for its rustic and very interesting toilets and showers. We will stay here underneath big trees for the day. Dinner at 20H00. For these that are into bird watching, this is the place with very capable guides.

After breakfast we go to a lodge not far from here called Nunda- a beautiful place and friendly owners and staff. Nunda has the biggest swimming pool in the Divundu area and beer on tap. The Mahango National Park with lots of elephant, buffalo, wild dogs, lion, kudu and many more is near Nunda and a visit worthwhile. Nunda has also boat cruises on The Kavango River. Dinner at 20H00.

We pack up camp and leave east through the Caprivi strip to Kongola, just before the Kwando River we turn right  into  the Bwabwata National  Park. Tonight we will camp at Nambwa next to the Kwando River. Lots of wild animals to see wandering in the plains next to the river. You can do  game drives by yourself or with the lodge. Dinner at 20H00..

After breakfast we drive to Namushasha lodge and book into the campsites overlooking the Kwando River. These campsites are under very big trees and ideal for game watching. We will stay two nights to give time to go on game drives in the Mudumu and Mamili National Park. Both these parks do have lots of wild animals like elephants, lion, leopard, wild dogs, cheetahs, roan, kudu and much more. Namushasha is a beautiful lodge so you can treat yourself with their facilities. Dinner at 20H00..

Today we drive to katima Mulilo, the capital of the Caprivi. Here you can do some shopping, fill your vehicle and then tonight we camp at Namwi Lodge just outside town on the banks of the mighty Zambezi River. There are boat trips available and a swimming pool. Dinner at 20H00.

After breakfast we drive to Island View Lodge, also on the banks of the Zambezi and this will be our last night of the tour. Tiger fishing is this place specialty. Tonight is the final dinner and big goodbye. This is also the sad part but hopefully everyone did enjoy the tour through the north eastern part of Namibia.

Coffee/Tea and rusks will be served-no breakfast. Everyone depart in his/her own time and way back home.

Lodges/campsites may change because of availability. 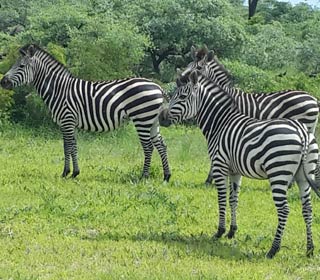 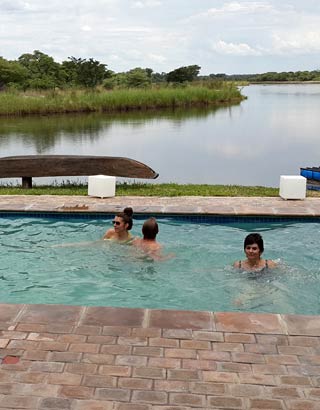 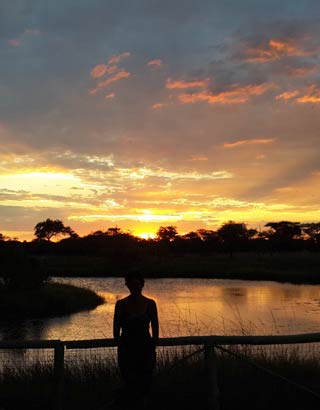 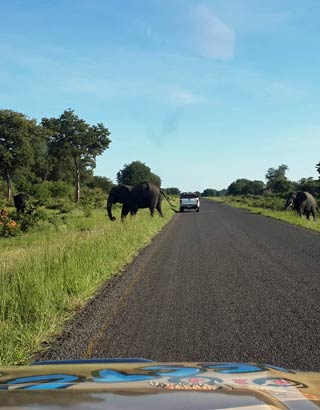 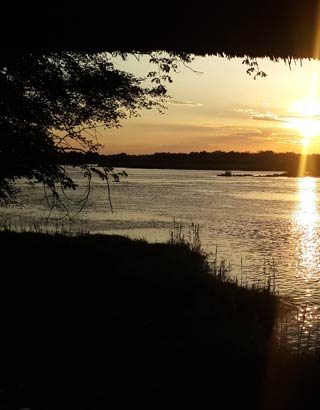 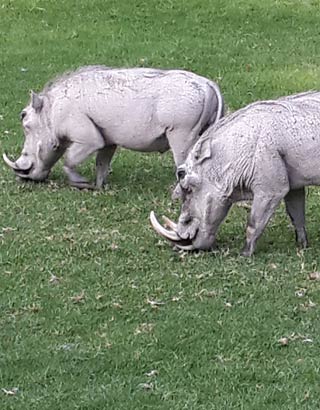 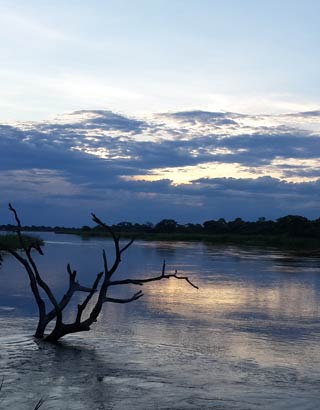 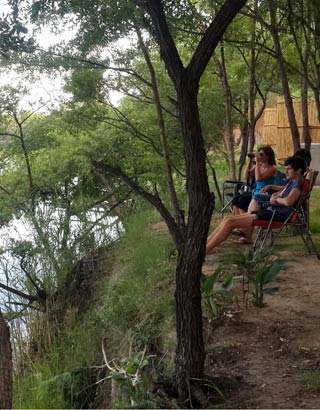 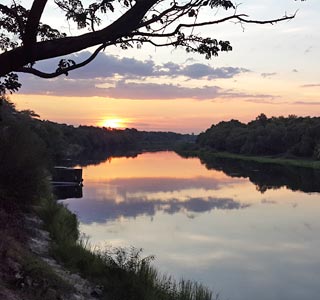 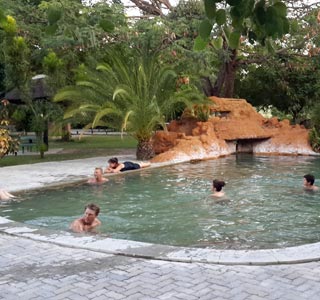 You are also more than welcome to decide on any date not on our program with your own group of friends / fellow adventures.