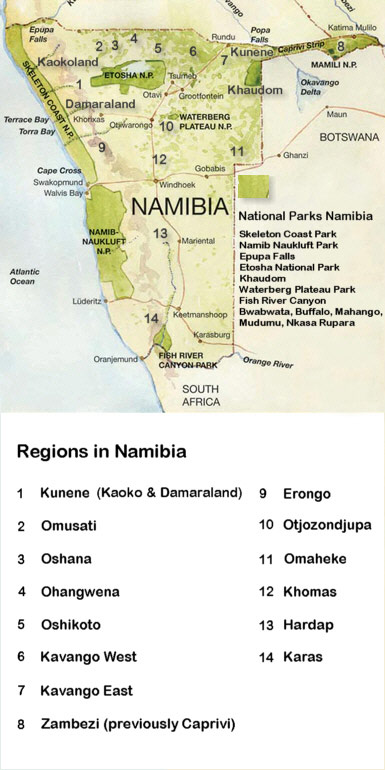 Namibia is a country in South Western Africa. On its southern border is the Orange River that borders South Africa, to the east is Botswana and in the north Angola, other neighbouring countries up north includes Zimbabwe and Zambia.

Since independence from South Africa during 1990, Namibia has become a major African Tourist destination, very popular due to its vast distance and tiny population. Travellers enjoy the desert vistas of the Namib Desert, some of the best game viewing in the world at Ethosa National Park, the unspoiled nature and people of Damara and Kaokoland, the green forest of the Kavango and Caprivi up north.

Namibia has a population of 2.2 million people and a stable multi-party parliamentary democracy. Agriculture, herding, fishery, tourism and mining form the basic of the economy.

The name of the country is derived from the Namib Desert, meaning and considered to be the oldest desert in the world.

Some basic facts about Namibia:

North of Tsumkwe, beside Botswana’s border lies the remote Khaudom National Park. It protects an important area of the northern Kalahari that is sustained by underground waters of omarambas- dry and sandy riverbeds holding subterrean water. The game is wild and the atmosphere magical. There are large herds of elephant plus Tsessebe, red Hartebeest, blue wildebeest, kudu, oryx, giraffe and plenty of the uncommon roan antelope. Main predators are lion, leopard, cheetah, spotted hyena and lots of wild dog. However, come here to experience a wilderness in a very remote corner of the Kalahari, let game sightings be a bonus. The roads are very sandy and a 4×4 is required.

The Kavango Region includes the politically separated areas Kavango West and Kavango East.  Life in the Kavango region, the natural surroundings and culture are strongly influenced by the Okavango River, a majestic river that originate from the Angola highlands and flowing east into the Okavango Delta in Botswana.

Rundu is in the middle and the capital, a large town with scenic views of the river. The Kavango region is 48 742 km2 and the population is about 266 000 people, most of them lives next to the river. They are poor and farm for own use only. A long the river is lodges for tourists.

The climate is hot during the summer months with rain, between 600-800mm. The plant and wildlife especially within the national parks is very abundant. Wildlife in the parks consist of elephant, buffalo, zebra, lion, giraffe, impala, rietbok, letchwe, wilddog and then hippo and crocodile in the rivers.

Tourist attractions are the Mahango and Buffalo National Parks and Rundu itself. The living museum of the Mbunza west of Rundu is also worth paying a visit.

The Caprivi is a tropical area,with high temperatures and much rainfall during the December –to- March raining season, making it the wettest region in Namibia. The terrain is mostly made up of swamps, floodplains, wetlands and tropical woodlands.

In addition to the Zambezi River, the strip also holds the Linyanti and Kwando River, which marks the borders with Botswana, Angola, Zambia and Zimbabwe.

Katima Mulilo is the main capital of the region and the total population is 80 000 people. They also farm and are poor, tourism is very important in the region with lots of lodges and campsites. The region is 19 532km2 and is almost entirely surrounded by foreign countries,its only domestic border is a short connection in the west with Okavango region.

There are four National parks in the Caprivi Region: Mamilli,  Mudumu, Bwabwata and the Nkasa National Park. Wildlife like elephant, buffalo, lion, cheetah, wilddog, roan, giraffe, letshwe, kudu and 439 bird specias are in the parks.

Damaraland is a different kind of wilderness and experience in Namibia. In this northern part of the land you will see spectacular wide open spaces interrupted by mountains and acient craters that hide many pre-historic treasures.

The region is from the Spitzkoppe and Erongo mountains to the uniab River close to Palmwag. Khorixas is to say the capital of the region and the roads are all normally in a good condition.

Damaraland was occupied primarily by the Damara people, later on it became home of the Herero and Riemvasmaak people of South Africa. Nowadays they all like to be called Damara people and they do farming, herding and then tourism.

Brandberg is the highest mountain in Namibia and play host to the well known White Lady Bushman Painting. To the south is Spitzkoppe and east the Erongo Mountains.

Twyfelfontein is the largest known concentrate of stone age petroglyphs in Namibia. Nearby you will find the Burnt Mountain, petrified forest and the organ pipes. The Vingerklip near Khorixas and Ugab terraces are also worth a visit.

The Fauna and Flora of Damaraland have adapted perfectly to the harsh weather conditions of high heat and draughts. You will find the desert elephants, black rhino, desert lion, cheetah, kudu, oryx, springbok and ostrich in this region.